The Iberian Southwest Corridor is a concept that aims to define a reality that does not exist today, but that we intend to exist in the near future. We are not talking about a train or a specific space, but about a dynamic system generated in a territory as a consequence of the flows that infrastructures produce.

The territory has traditionally been defined as a space delimited by borders, within which there are some power structures, a population with a feeling of belonging and a decision-making capacity over its territory.

The concept of “corridor” is not defined by the space and the infrastructures itself, but by the flows that run along some axes, that is, by their integration into a superior system with its own dynamics and independent that escapes political decisions.

The territory tends to focus as a closed system with resources to optimize, the Corridor tends to emerge as an open system of possibilities to develop.

The Iberian Southwest Corridor will be a new axis of international development in the vicinity of the connection infrastructures between Madrid and Lisbon that will extend capillary throughout the proximity territory connected to it. It does not improve space, but transforms it. 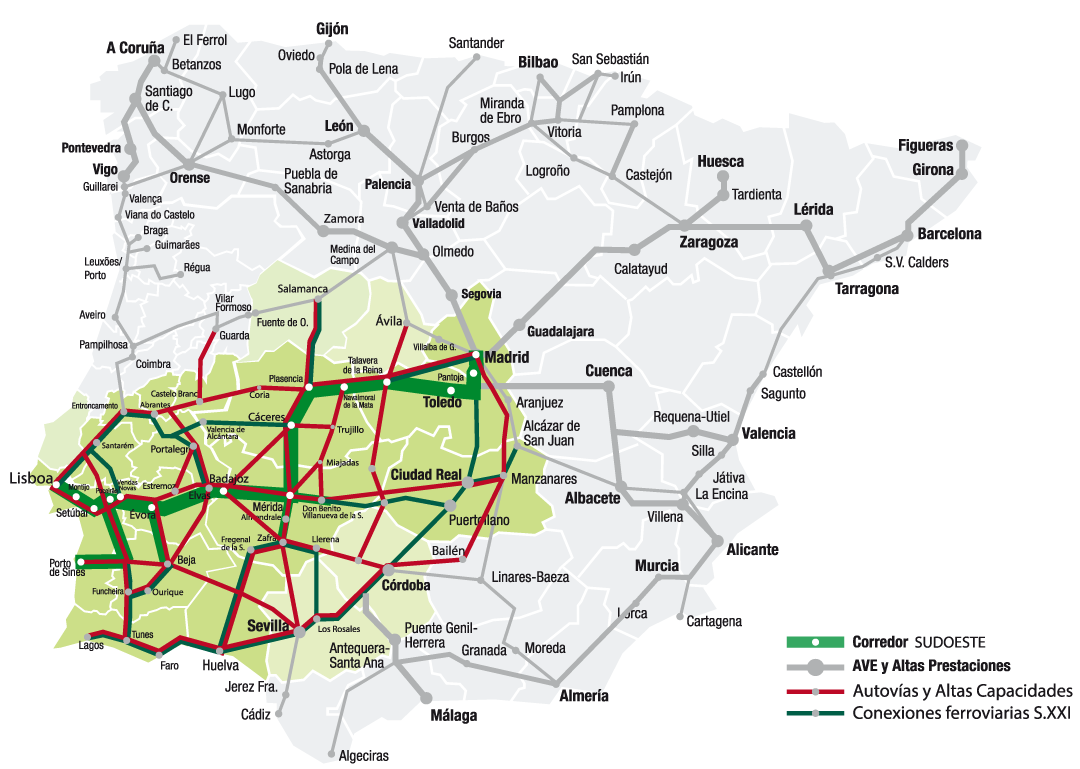 “In the 21st century the conditions of development and prosperity are not inherited, they are created” Michael Porter

In the Southwest of Europe, a green area stands out in the geographical maps that coincide with the Tagus and Guadiana valleys as they flow towards the Atlantic . For thousands of years, it was the best land connection route between Central Europe and the Mediterranean with the Atlantic coast. Since before the Romans this space consisted of Lusitania. The Romans positioned it as a place of connections between North and South, between East and West. Unity, mission and position that it maintained until the 13th century when the oldest border in Europe was created with the Reconquest, which has remained unchanged and impervious for longer, assigning the territory to a defensive mission, and where they have been freed multitude of European conflicts. In the 13th century the Iberian territory was fractured creating the Spanish-Portuguese Raya that continues to exist as a space of separation between the two peninsular nations and European allies.

There has been no transport and communication infrastructure between the two countries, since centuries-old mutual distrust has prevented connection facilities and both countries have turned their backs, looking at one the Atlantic and the other the Mediterranean, and creating a border of incommunication, poverty and depopulation. For centuries it has been expelling population and generating a subsistence and extractive and colonial economy.

The incorporation of Spain and Portugal into the European Union opened expectations for Extremadura by going from a peripheral and border to a central situation and a connection between the two states and their capitals. However, after more than 30 years since joining the EU and having given ourselves self-government, we continue to be in the worst positions in the unemployment, income and GDP per capita rates and expelling the population. In these years, millions of resources have arrived with which a wide network of inland roads and two large highways have been built that structure the region from North to South and from East to West, but we have not managed to get out of these positions of underdevelopment and lack of communication. 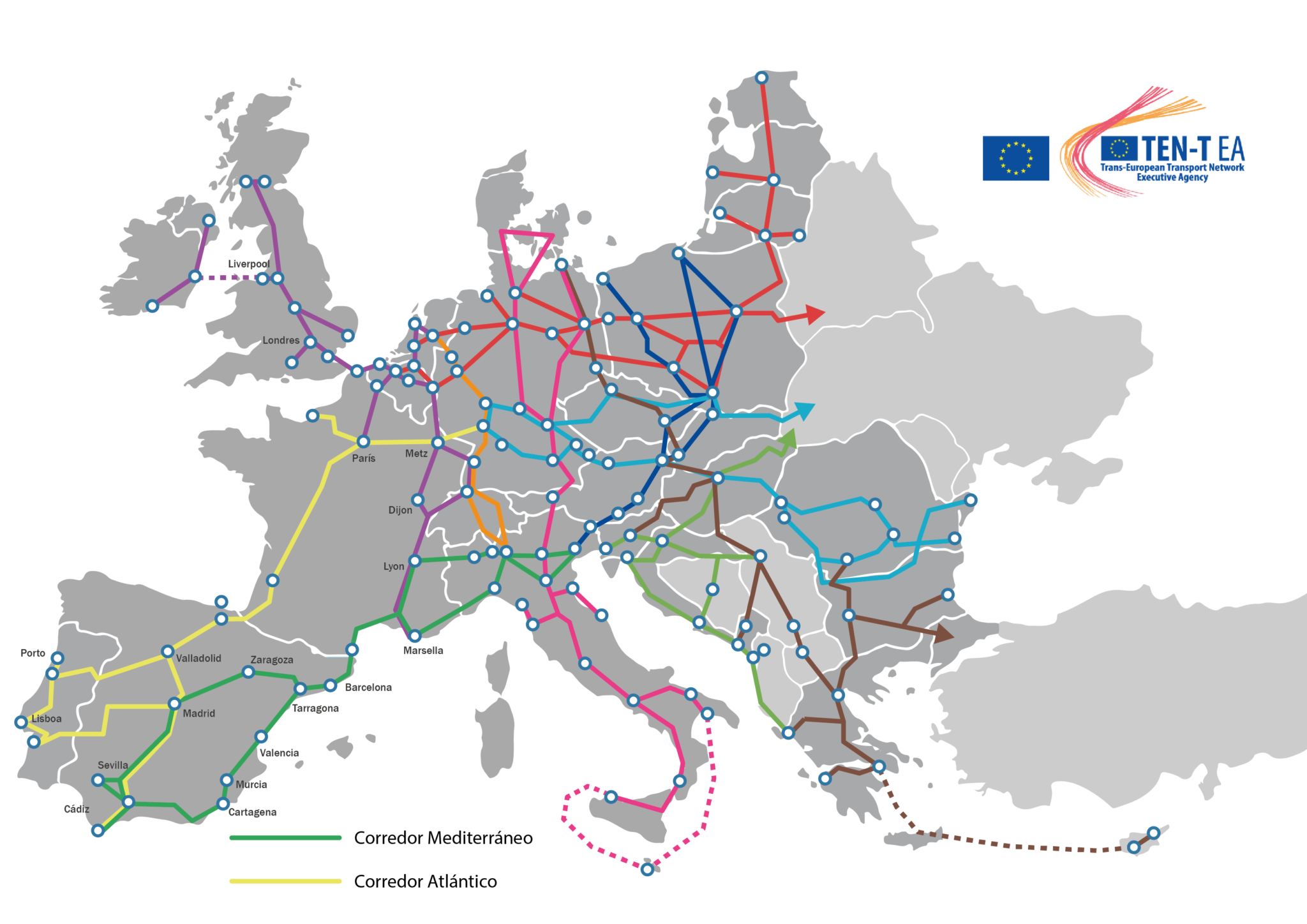 Despite the fact that our railways and roads have been foreseen in the National and European Infrastructure Plans in the last 25 years, the years have passed and the plans have not been executed. From 2006 to 2017, 2,300 million euros were included in the State budgets for the LAV of Extremadura, of which only 1,334 were executed. Reflections, plans and budgets are useless if we are unable to make them come true.

What happened to us?. Can you imagine that a neighborhood of Madrid in which a million people lived was separated from the general metro network of the city and only had four trips a day with obsolete trains and infrastructures and hardly any maintenance? What do you imagine would happen if that were so? What do you imagine the media would do? It is clear that you have to have a lot of imagination to accept this reality, because that continues to happen today and for national public opinion it does not exist.

STATE OF THE WORKS

It is a broker that promotes and enhances the relationship between Spain and Portugal.

High-speed, electrified rail infrastructure is becoming the standard of the 21st century and an environmental necessity.

There is a historical debt of public infrastructure investments in the Iberian Southwest.

It connects two major European capitals: Lisbon and Madrid. It is an EU mandate. Distances and extreme populations justify the infrastructure. It directly connects more than 10 million inhabitants and 20 million tourists.

5. It is socially efficient

Depopulation, poverty and isolation have a high social and economic cost for both States and for the European Union.

The investments and costs of the Southwest Corridor are the lowest and with the highest return of the entire high-speed and high-capacity Iberian network.

Very justifiable social and economic returns on investment due to the existence of large amounts of resources and capacities that are currently under-utilized and that can be optimized.

The Iberian Southwest and its population cannot be isolated from the rest of the Peninsula and from Europe, as an inland island.

The Southwest Corridor powers the rest of the Iberian and European corridors and the global network as a whole. It does not subtract, it multiplies.

Investments in the Southwest Corridor do not imply an increase in the public deficit due to higher returns than direct budget investments and in no way can they be considered as one of the causes or solutions to the budgetary mismatches of both countries.

The current state of rail connections is unsustainable and unjustifiable, being an unworthy situation for both countries. 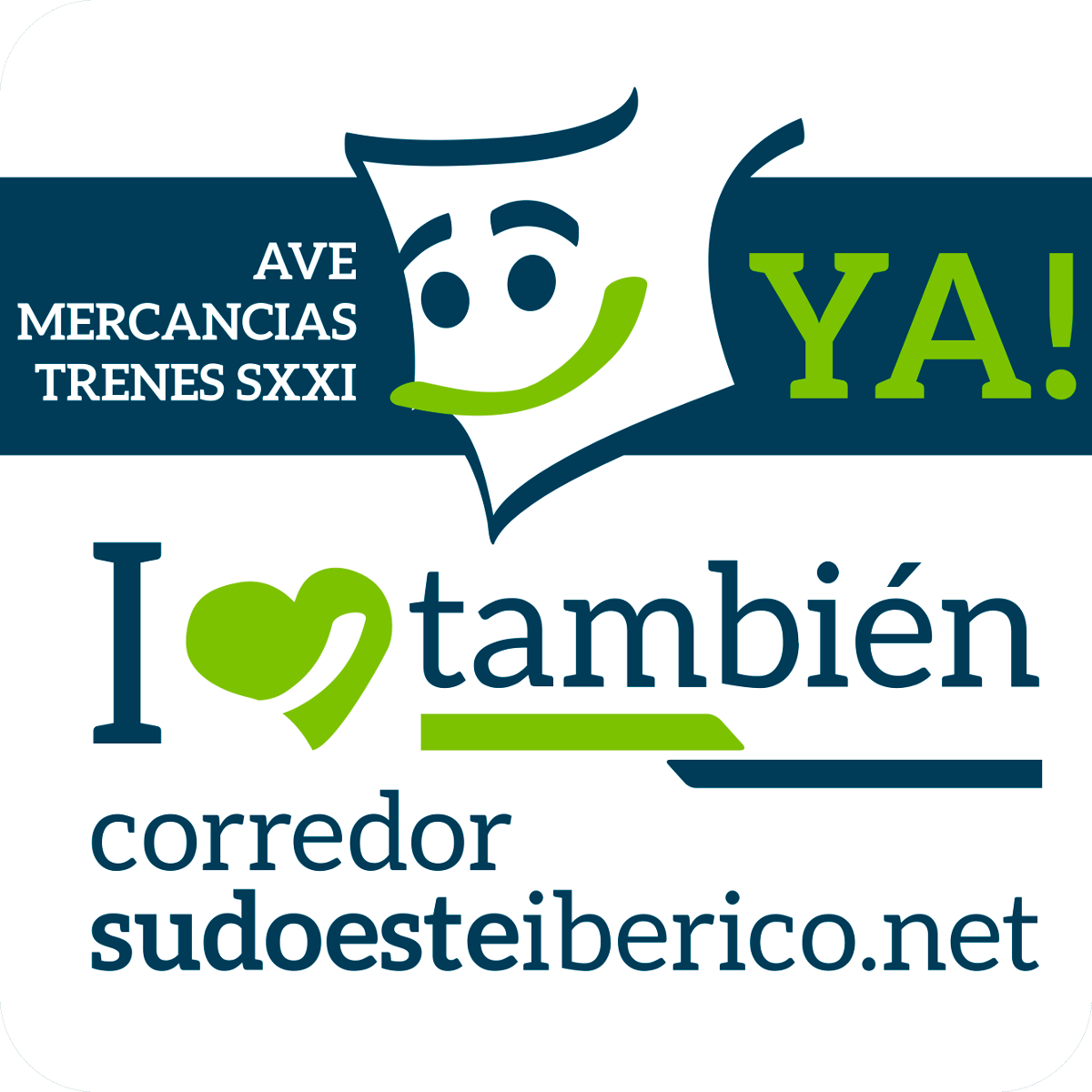